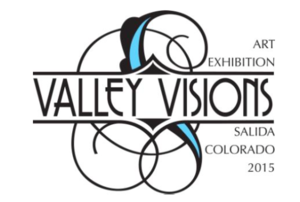 While viewing the exhibition, Valley Visions patrons feasted on a banquet of gourmet hors d’oeuvres, sipped libations, enjoyed music by guitarist Red Tischer, and voted for the their favorite artwork.  Many guests expressed astonishment at the impressive quality and range of artistic talent in Salida, as demonstrated by the works in the show.

The Valley Visions art exhibit will remain on display in the SteamPlant Annex through May 30.  Admission is free; and all entries are available for purchase.  Salida Council for the Arts is an all-volunteer organization; and persons wishing to help support the local arts scene may learn more at www.salidacouncilforthearts.org