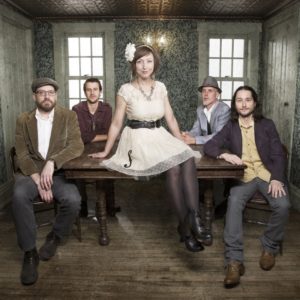 Yep – they’re back!! The Ragbirds‘ “infectious global groove” will be sure to rock your weekend. Come for a fusion of folk rock and pop hooks over danceable world rhythms stirred with a Celtic fiddler’s bow.

With Salida’s own CHRIS NASCA opening!

Tickets are $16 in advance and $18 the day of the show, and can be purchased at the SteamPlant Box Office or online HERE.

For years, “home” was a place The Ragbirds rarely visited. The band’s music — a genre-bending hybrid of indie-pop melodies, global rhythms and songwriting styles influenced from all over the world — was as broad as their audience, which stretched from the group’s hometown of Ann Arbor, Michigan, to the shores of Osaka, Japan (where they scored a Number One pop hot with the song “Book of Matches”). Show by show, in venues ranging from rock clubs and performing arts centers to festivals encompassing everything from bluegrass to electronica, The Ragbirds developed a well-deserved reputation as one of the most dynamic, high-spirited live bands in roots music.

Written and recorded in the wake of the birth of co-founders Erin Zindle and Randall Moore’s first child, ‘The Threshold & The Hearth’ — the band’s fifth studio album, out March 25 on Rock Ridge Music – adds another dimension to the band’s catalog.  It’s an album that explores the ways in which love and family relationships can weather the storms of life, year after year. An album that asks questions. An album that offers an answer, too: hope.

Released three years after 2013’s We Belong to the Love, a live album that shone a light on the band’s punchy, positive-minded stage show, The Threshold & The Hearth is louder and livelier than anything they’ve done before. The guitar solos, played by Erin’s brother T.J. Zindle, point to a longtime appreciation for rock and roll. The deep-seated grooves, performed by the three-piece rhythm section of drummer Jon Brown, percussionist Moore and bassist Dan Jones, mix punch with precision. And Zindle’s conceptual storyline for the album — a make-believe tale of two lovers who meet, fall in love and spend the next 20 years dealing with the joys and struggles that come with any long-term relationship — turn The Threshold & The Hearth into a universal album that appeals to anyone looking to forge a home out of the chaos of everyday life.

With influences ranging from Paul Simon to Peter Gabriel, the band turned to Grammy-nominated producer Jamie Candiloro for his help on the album. Candiloro’s influences were similarly wide-ranging, with a resume that included credits on albums by R.E.M., Willie Nelson, the Eagles and Ryan Adams. Together, the group captured the spunk and spirit of a Ragbirds show, with Zindle’s new daughter serving as an inspiration.